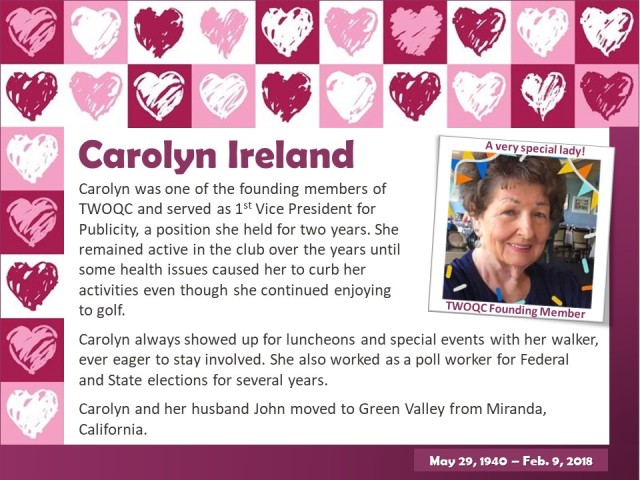 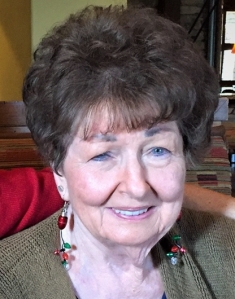 Carolyn’s obituary was submitted to TWOQC by her daughter, Shana.

Feb. 23, 2018 — Carolyn Louise Mabrey Ireland, 77, passed away peacefully in her sleep at 11:00 a.m. on Friday, February 9, 2018 at Brookdale Senior Living in Salinas, California. She was born May 29, 1940 in Jonesboro, Arkansas the eldest daughter to Hosea Demont Mabrey and Evelyn Roleson Mabrey. She married John Ireland on August 12, 1966 and he survives. She had two daughters Shana Ireland in 1967 and Tara Ireland in 1972 who are surviving family along with her sister Marilyn Lay and brother in-law Carl Lay of Elizabethtown, KY, and brother Myron Mabrey and wife Pat Mabrey of The Woodlands, Texas.

Carolyn was a graduate of Arkansas State University, somewhat of a trailblazer as one of the only women taking business courses at the time. At ASU she was a Phi Mu sister (the second oldest female fraternal organization). She graduated with a business degree and moved to California. Settling in So Cal for a bit then headed to Humboldt county where she took a position at SHUS district and taught business education for 37 years. She originally taught business skills: typing, shorthand, ten key and accounting, in addition to many extra-curricular roles such as yearbook and PE. As technology evolved Carolyn continued her own education and started the HROP program at South Fork High School where she created the first computer room and continued to teach modern business skills.

She belonged to DKG, Delta Kappa Gamma a society for women educators where she made many friends and held many positions over the years including state level secretary. Carolyn believed in being involved and took this to a high level. She was originally brought up in the Methodist faith (UMC of Jonesboro, AR) and was a long-standing member of the Presbyterian church where she was active and taught Sunday school. She was very civic-minded, a true blue politically active Democratic who cared about women’s rights.

Carolyn and John moved to Quail Creek (Robson Community) to retire where they built a home in Green Valley, AZ and lived there for 14 years. She was an active golfer, (founding member of the Quail Creek lady 9ers) played Bunco and liked to entertain and have fun. She was a founding member of The Women of Quail Creek organization, and belonged to the ladies Red Hats club. John and Carolyn enjoyed their life together and traveled many places including Europe, Mexico, an Alaskan cruise and trip to China together.

Moving back to California only recently to be near her daughters and into Assisted Living, a heart condition was discovered that shorten her time with us. She was beloved by her family and many of her friends and students who credit her with having a profound effect on their lives. Carolyn could sparkle and charm and was always well dressed, a fiery go-getter with a larger than life personality — she will be dearly missed!

Memorial service to be held:

Condolences may be sent to the family in care of Carolyn’s oldest daughter: 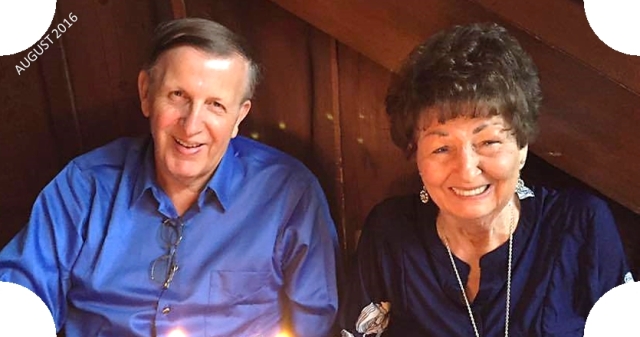 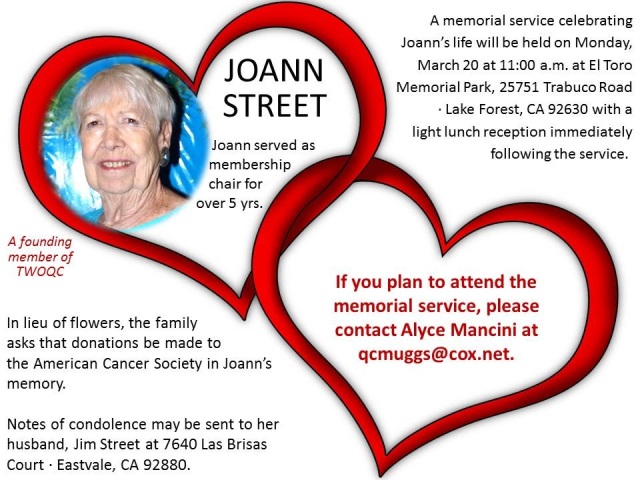 Joann (Brothers) Street
Joann passed away on January 26, 2017, in Eastvale, California, at home after a sudden and short illness of three weeks.

During the last weeks of her life she was fortunate to be constantly visited by family members, including her grandchildren whom she treasured, and died peacefully with her husband, Jim, by her side.

Joann was born on March 20, 1934 in Newark, Delaware. She attended P.S. DuPont High School and Goldey Beacom Business College. She had a brief, yet successful, business career as a Secretary at Ft. Hood, Texas and a Legal Secretary for a prominent law firm in Wilmington.

After her first born child, Joann devoted her full, enriched life to being an adored & supportive wife, loving & devoted mom and, in her grandkids own words an “incredible, Rock Star grandmother”, lovingly referred to as Gramz.

Aside from family Joann loved travel, reading, crosswords and had a love, hate relationship with golf. She made friends easily and retained them wherever she lived – in Delaware and from 1968 in California, Arizona and lastly back in California where she returned in 2016.

A Memorial Service celebrating Joann’s life was held on Monday March 20, 2017, at 11 a.m., at El Toro Memorial Park, 25751 Trabuco Road, Lake Forest, CA 92630, with a light lunch reception immediately following the service. In lieu of flowers, the family asks that donations be made to the American Cancer Society in Joann’s memory.

An online photo album: In Loving Memory of TWOQC Members