A Brief History of the Women of Quail Creek

In 2004, five Quail Creek women decided to form an organization that would meet monthly and be open to all the women of Quail Creek in Green Valley, Arizona. Many meetings were held to establish the rules and objectives for the club that they named simply The Women of Quail Creek. The Mission of the club was to discover and develop an awareness of current affairs and provide relevant information and education. The new organization would also provide an opportunity for socializing and give support to the welfare of the women residing in Quail Creek and their families.

The first Executive Board members were Joy O’Farrell, Chairman; Joann Street, Membership; Carolyn Ireland, Publicity; Suellen Vatter, Secretary, and Jan Howard, Treasurer. The first meeting of the Women of Quail Creek was held in March of 2004 and with approximately 40 ladies attending.

NOVEMBER 16, 2021 UPDATE! The IRS determined that The Women of Quail Creek (TWOQC) is officially approved as a Nonprofit Arizona Corporation and a public charity under the Internal Revenue Code Section 501(c)(3), meaning that TWOQC has moved from a Club to a Non-Profit Arizona Corporation. This determination opens many doors for our fundraising for the High School and Women in Transition Scholarships and for the local charities in Green Valley and Sahuarita, AZ. A Donations page has been established on this website. 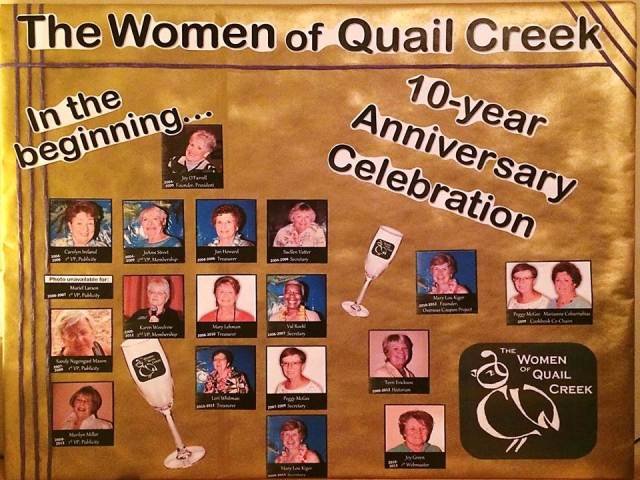 Today that small group continues to meet monthly and has grown to over 370 members (in 2014).

(Prior to 2020, the position was: 1st Vice President, Publicity)

(Prior to 2020, the position was: 2nd Vice President, Membership)

(Created as an elected position in 2021; appointed by the President in January 2021.)

(Created as an elected position in 2020. Previously a responsibility of Past-President. Until 2021, the position was called Community Relations.)